What I find in the poet is a MENSA-like recall of events stored in neuron reel. How he goes back and forth, and the nameless love interests that keep on appearing in the tapestries of words he weaves; and how he always draws a sense that small moments can be eternalized. The poet makes love, and the moments that escaped from your love clutch, into a launching pad of anecdotes.

I bought Love and Protest a few weeks back after a book launch and what follows is a few ideas I wish to share of the book, in my own style:

I will start with the first poem,  Beyond where the earth spins. It draws the reader to a sense of being on a knife’s edge of history; of how moments pass in personal clarity and yet indecision, inclusive of motifs of torment, looking back: the “what if”, burning like psychotic paranoia and yet flying away from the poet’s world, eventually.

For S.K.: What beauty the poem and (I suppose) the love interest in concern, would have been. The presence and the amnesia of a fellow writer’s name (a crime for a writer to forget a love interest’s favorite author as I see things) walloped by a library beauty, who left an eternal mark. Some love interests leave indelible marks before they disappear to the “pathless night” and what epiphany is there in outer beauty ruffled by your own eyes that capture, like a predator, the little things that are omitted in first glances. It’s the lasting impressions that count I suppose.

A little distance can be a trait of fondness. How we drift in and out of moments, some verbal and some muted. The Days without Rain is a trademark poem on those somewhat un-ignorable moments in the dead heat of silence, when moments are captured and hung on memory’s wall.

The pining motif that we all experience in an emptying moment, in the presence of outlandish light at dawn. How waking up to an empty bed is welcoming a ghost of the past, to a time and place, that is defined by a unit on a face of a clock. Distance: isn’t it supposed to make the heart go fonder? This is what Empty Room captures for me.

I never knew that a woman could be flirtatious with a cup of tea. Now I know how the author sees little moments that are both inviting and elaborate to the third eye. A short poem that wakes you up, like a first ray of light and goes away like a dew drop, evaporated in an instance, while leaving the taste of a cup of tea on the many tongues inside our eyes.

Reid Avenue Pavements gives a true glimpse of the white coats of paint that were given to the Racecourse, and the 20-somethings and joggers that loiter, which are part of the poet’s inspiration here. The poem drags me like the wheels of a bag, on a pavement in Reid avenue, the baggage (and even the dreams) we carry on our own two feet, our wheels, and how easy it is to let go of everything, jogging, wandering, walking, admiring the “military masonry” of a place that will now defy time. How “scapes” and escapes come in the form of masquerading facades and tiled pavements, selling beauty to the beholder. I was really hit with wit, at the adjective usage here in this poem, to define women’s breasts and dreams.

In Momentary Rain Vihanga capture the gatekeepers of passion, unlocking, breathing in to the other, the “insistent fire of love”. A gem of a short poem, that anyone can understand, in its sheer simplicity.

One of my favorite poems (Green Effect) ends in triumphant biological statement: “The color drains, the system shakes as a lily shakes, to shed soft drops of dew down the husk of a beetle on whom clumsy feelers grew”. Can you restrain beauty when it’s marching so gallantly? I dare say “Yes”. How beautiful is the poet’s integration of biology to an emotion! They say nature is one of the hardest writes but the poet has expressed nature in sublime perfection here.

What I find in the poet is a MENSA-like recall of events stored in neuron reel. How he goes back and forth, and the nameless love interests that keep on appearing in the tapestries of words he weaves; and how he always draws a sense that small moments can be eternalized. The poet makes love, and the moments that escaped from your love clutch, into a launching pad of anecdotes. The fine detail of poems tells me of how meticulous the poet is in his craft.

As a poet who writes of love often, what I find here is love the budding type, and the wilted ones, both ends of the same plot, but with different players. How a meeting in a library haunts the poet, holding back words from a winged creature but yet he doesn’t hold back the essence of the moment in their poetic expression.

The writer also draws from nature, the rain, the clouds etc. which is a good indicator of how we are all children under the same sun in a small country in the Indian Ocean. Furthermore, he scripts nature’s convergence with time and place to give a backbone to the happenings all around. 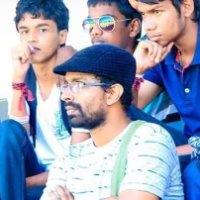 If I am to choose between categories, I prefer the love poems than the others. The punctuation and drift of words, giving breathers, makes the reading of the poems easier. The only brief wish that I have to share with the poet is that as a person who loves a climactic ending I sometimes look for climactic ends in other poets. This is not present in every one of Vihanga’s poems. I suppose climaxes can be reached even in the body of a poem, so I will eat my words here and now.

I find Love and Protest a rare jewel, polished by poetic tricks and anecdotes which are well elaborated with plot and ending. I wish the poet more success with his poetic ambitions. I will end by saying, that in a nutshell, this has been a revelation to me, how I neglected reading this work since the day I bought it (b’cos of my resistance to be influenced by other poetic works), and yet a few stints afterwards, I’m famished for more.